There has been a lot of interest recently in the carbon footprint of football, both clubs and competitions. UEFA has announced it is offsetting 450,000 tonnes of emissions from Euro 2020; league tables of clubs’ green performance have been published in the BBC and the Daily Telegraph.

However, there might be an elephant in the room: football’s biggest carbon footprint probably comes from its role as a vector of consumerism. As football is funded in great part by advertisements for consumer goods and services, the more we pollute, the more we can pay our heroes, and the more trophies we can win.

Something like £2 billion is spent on promoting consumer brands through the UK Premier League each year. This is in the form of sponsorship, advertising and TV rights which are partly funded by advertising sales.

The annual spend on Premier League club sponsorship of shirts, sleeves and other assets is something over £700m, and breaks down by sector as follows (data from Sportspro Media, figures in millions of GBP): 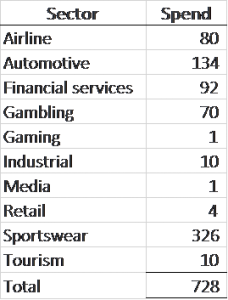 The environmental impact of these sectors, might be broadly evaluated as: 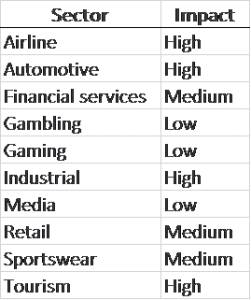 Note that I classified gambling as low impact – low environmental impact, that is. The social impact of promoting gambling is not considered here.

As well as the direct sponsorship, there are also the advertisements on the TV channels which broadcast matches. During half-time of the Man Utd v Newcastle game on 26th December, Amazon Prime showed advertisements as follows:

This was a positive surprise – two of the advertisements arguably had a relatively positive environmental impact – an electric car and a home cooking service. This is a big difference from watching US broadcaster ESPN where the advertisements were mainly about big cars and hamburgers with high carbon footprints.

It is not so simple. Advertisements might result in increasing sales in a market as a whole – persuading someone to buy a car which they might not have bought otherwise. Or they might just cause changes in market share without actually causing a net increase in sales in that market – persuading someone to buy a Chevrolet rather than a Volkswagen. There would only be a significant environmental impact if the ads cause an increase in sales rather than just a shift in market share. We will need plenty of careful academic study if we want to understand the impact of football advertising.

Notwithstanding the mechanisms of impact, football is a window onto consumerism. Its sponsorships and advertising encourage us to spend and consume; they reinforce the pernicious notion that spending and possessions make us happy; they conveniently gloss over the horrific environmental damage caused by the lifestyles which they promote.

At the same time, some advertisements can be positive in the case of Amazon’s broadcasting on Boxing Day. This points to the potential for football to be a vector of good.

If football really wants to reduce its carbon footprint it needs to substantially decommercialise. It needs to move away from the advertising model which primes (yup, that’s why they call it Amazon Prime) us all to be spenders and polluters. It needs to scale down dramatically, stripping out the promotion of harmful products and eliminating socially and environmentally damaging messaging. Too big an ask? Of course. But at least we can start by knowing the facts when we talk about football’s carbon footprint.

I haven’t found research on the mechanism of football as a vector of consumerism. If anyone is interested in pursuing that, do get in touch.

1. We’d need an academic to calculate this more precisely. Here is a rough and ready approach. For airline sales take Wizzair as an example – their sales are around €2bn and their emissions around 3m tonnes a year. So an extra £500m of airline sales might generate an extra 750,000 tonnes of emissions. For car sales, assume a car costs £20,000 and needs 20 tonnes of CO2 to manufacture and emits a further 4 tonnes a year for 5 years, that’s 40 tonnes CO2 for a car. So £500m of car sales would imply around 1 million tonnes of emissions.