Pelicans, sufficiency and fear of the future

How we respond to sufficiency is critical for addressing the problem of greenhouse gas emissions.  This is critically linked to education and attitudes to risk.

Consider how pelicans handle sufficiency.  Of these the American naturalist John James Audubon wrote: “Pluming themselves, the gorged Pelicans patiently await the return of hunger.”  So they eat, and then they contentedly wait until they need to eat again.

My cat deals with sufficiency in a similar way.  She spends about 18 hours a day asleep.  Once she has eaten and cleaned herself thoroughly, inspected her small territory, all that remains is to rest and sleep.

Even some humans have the wisdom to handle sufficiency like the pelicans.  My daughter, who spent a month in Africa, said: “In Malawi loads of people just sit about all day.”

These people and animals deal well with enough: in play, in rest, in reflection, in cleaning, in digestion and simply in waiting.

What a contrast to the anxiety and guilt we feel when we have had enough to eat, have a moment to rest and then are suddenly reminded of time passing!  Our culture says: “Get up!  Do, do, do! You have to be active! You have to fulfil yourself!  Get up, get on, get out! Get better.  Get more.”

But who’s got the smallest carbon footprint: the eager, conscientious, driven, ambitious, jet-setter, who never knows contentment? No. It’s Joe Six-Pack slooching around at home; or Uncle Alf pottering about in his garden, shuffling contentedly among his roses.

So there are huge numbers of people struggling against contentment.  Let’s look at how this battle is waged.  The first step in our struggle against contentment is to create want, a sense of lacking something.  The world offers us a wide menu of things to choose from which we could be lacking, but we can narrow it down to three main categories: physical comfort, social status and financial capital.

Once we start to perceive our morning bus-ride as uncomfortable we project in our minds the possibility of ownership of a car.  This creates a want and contentment is vanquished. Rather than sitting about in the garden we have to start working hard to be able to afford a car.

Thorstein Veblen’s invidious comparison* is the second creator of discontent.  We see that the Jones have rather plush curtains, thereby a sense of insufficiency is sown in our minds, and we won’t feel happy until we have even plusher curtains than the Jones.  This takes us down a well-documented** yet perilous path whereby consumption, initially for the purpose of comfort and status, becomes subject of an addiction, a goal in its own right, and, critically, an analgesic from the mental pains caused by our rejection of contentment and the pursuit of satisfaction from artificial wants with all the collateral damage it causes to us and the environment.  This mechanism is a vicious circle which denies us contentment indefinitely.

Then comes the third and most intractable escape route from contentment: the need for insurance against future risk.  Where pursuit of financial capital is not about satisfying the first and second causes of discontent, its role is to create a buffer against things going wrong. 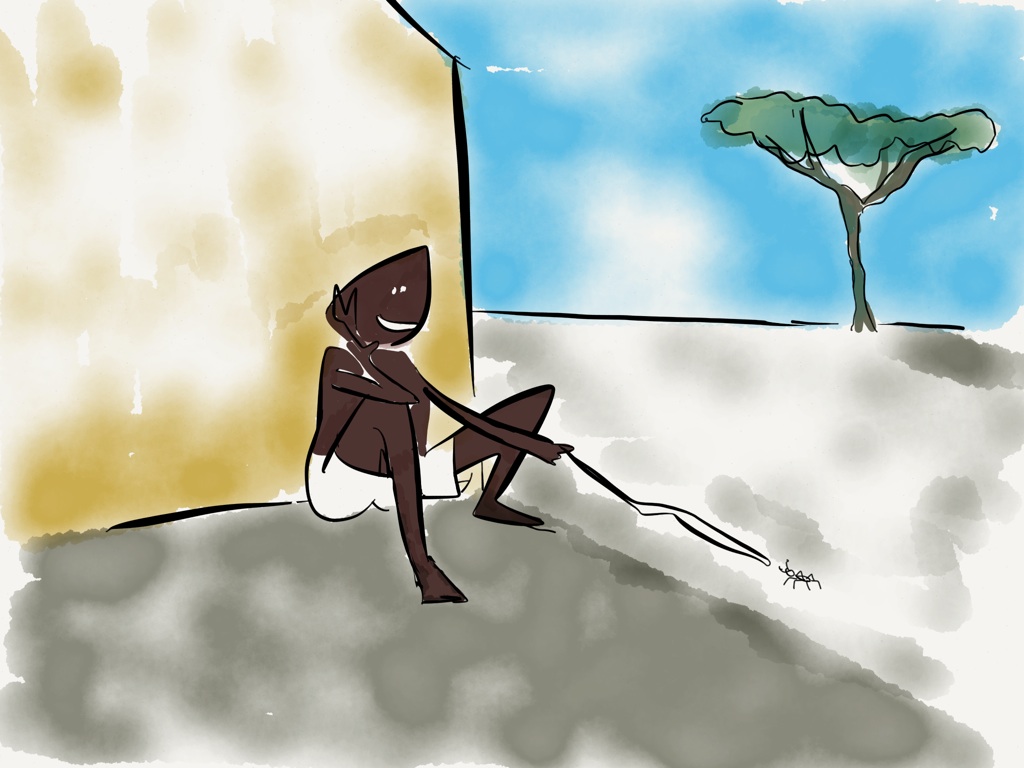 Think of the Malawian lad sitting in the shade, poking the ground with a stick. He can spend all day doing that quite happily.  Then he starts going to school, gets the bug, then gets a place at college in Lilongwe.  He completes his MA in Johannesburg and gets a job at a brokerage in New York.  He’s made it!  Now his notion of sufficiency has been completely changed!  Even when he has enough in American-sized bucketfuls, still he has a sense of insufficiency.

What has happened is that education has made him intensely conscious of the future and the risks it presents.  This has made him want to reduce his vulnerability to those future risks by accumulating wealth as a buffer.  Since the future offers an infinity of risks to him and his descendants, there is no limit to the amount of wealth needed to provide that buffer.  You can never get enough.  A few years ago enough was a stick.  Now it is the universe.

In this way education*** – by making us more fearful of the future – changes our sense of sufficiency.  We are no longer content with what we have.  Fearful for the future, we feel the urge to build a buffer of wealth so that we can be protected against all the adverse events which might occur.  In building that wealth we (generally) massively speed up the exploitation of the earth’s resources.

How ironic that education in general contributes so much to making us scourges of the planet: the ambitious jet-setter is far better educated than the Pelican, the cat, the Malawian boy, Joe Six-Pack and Uncle Alf.  But he still has a bigger carbon footprint than all of them together. Education is what opens his eyes to things he can compare his own status with and it is what gives him a more sophisticated sense of future risk.

These processes are among the most powerful drivers of human behaviour.  Moderating our sense of enough could have an immensely beneficial effect for the planet.  We must take our lead from pelicans.

1. Boredom intolerance and loneliness also seem to motivate busyness.  While the three forces above each above imply a direction, these two just create a more general sense of want without prescribing action.

Boredom has a history.  In the 17th century Blaise Pascale said something like:

“I have discovered that all human evil stems from one fact alone: man’s inability to sit still.”

It we can tolerate stillness or boredom, then we are less susceptible to the lures of physical comfort, social status and financial capital.

2. A further category of motivating busyness is vocation.  Rather than wishing to satisfy a want, the individual motivated by vocation seeks to remedy an injustice or misfortune brought upon someone or something else.  The altruistic and beneficial character of a vocation puts it in a different category from the three categories above which are essentially self-serving.

* See Theory of the Leisure Class

** See The Joyless Economy by Tibor Scitovksy.  And more recently this article by George Monbiot: http://www.monbiot.com/2014/05/16/are-we-bothered/

*** Despite the generally negative impact of education on the environment, there are, of course, many specific pieces of education which are good for the environment: learning about the importance of conserving forest, caring for other species and so forth.

2 Responses to Pelicans, sufficiency and fear of the future