The greening of Emil Szontagh

In January 1960 Emil Szontágh, a resident of Pécs, a city in southern Hungary, was awarded this certificate. 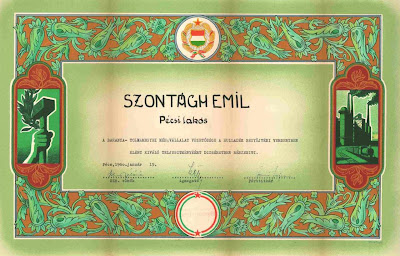 The certificate recognises Mr Szontágh’s outstanding performance in the recycling competition organised by the MEH company of Baranya and Tolna County. Note the signature not only of the Company’s management but also its Party Secretary. That does not mean the Entertainments Officer.

With this certificate on the living room wall, imagine the pride felt by Mr Szontágh, Mrs Szontágh, and the little Szontághs, as they served apple cake and chicory coffee to the friends and relatives who came round just to see the prize. What an incentive for others to follow their fine example.

We laugh at those quainter, simpler times. We do not like the communist backdrop to this vignette played out 49 years ago. We argue that the motives were economic and not ecological. And we point to the picture of the factory, spewing forth smoke, as a reminder that the environmental cost of communism is as bad as that of capitalism. Notwithstanding all that, giving fifteen minutes of fame to Mr Szontágh was simple, effective, and cheap policy measure, and made people feel good. It was clever, because instead of using market mechanisms, it was about building a culture of environmental responsibility. All with a certificate costing a few cents.

The reason why it is difficult to be green is that we are still hard wired to be hunter-gatherers. When the camp runs out of shade and firewood, when the water is too dirty to drink and the fish have all gone, when the public shit hole is too smelly, you just up sticks and shove off to find somewhere else. There is no need to clean up.

We have no natural instincts to look after our environment. We never evolved them – survival of the fittest means that; it does not mean survival of the ecologically concerned.

City-dwellers, denizens of the 21st century, unable to rely on instinct for guidance as to how to look after the planet, need other tools: laws and culture.
Our laws are shaped by the will of the people and the needs of the market; those, in turn, are shaped by our instincts. Thus it is not surprising that reliance on laws for protecting the environment only works moderately well. Democracies put the interest of living voters ahead of the interests of future generations. Voters with no evolutionary instinct to care for the next tribe to turn up on their patch will not vote for measures which appear to place the interests of the next tribe ahead of their own.

Culture is difficult for politicians because it that aspect of our behaviour which is not legislated. Politicians believe in ruling by legislation only. Not by example. Not through leadership. Just by writing rules. So politicians don’t understand culture, which is all about unwritten rules.

Culture’s unwritten rules are passed down by nurture and education. An infant sees its parents put litter in the litter bin; a mother tells tales of woodland and birds; a child witnesses the ritual of recycling performed week in week out; a father walks to the shops, making light of the journey by telling his son a story on the way; a family tidies up carefully after a picnic in the country… hundreds of small, repeated, careful acts which imprint in the mind of a growing child a form of behaviour which evinces care for the environment.

As the communists of 1960s Hungary show us, the state is not helpless in the matter of building a culture of environmental responsibility. But today all the emphasis is on carbon pricing and technology and regulation, and culture is ignored. The result is that reducing emissions will prove to be expensive: a culture of environmental care brings by far the lowest marginal abatement costs.