Posted on January 27, 2008 by James Atkins
when two vectors of evil – the German Auto Industry and the European Kommissariat – collide…1

In a leafy street of the Porsche Cayenne screeched around a corner and roared down the road leaving a stray cat, three songbirds, an elderly woman, and her bags of shopping plastered on the tarmac. A glance inside the cockpit revealed the Porsche Cayenne driver – closely cropped hair, Neanderthal forehead, and a bronzed chest shimmering with gold. Anyone would have thought it was a typical driver. But the KK tattoo on the driver’s exposed shoulder told Nat Eb otherwise, as he hurled himself out of the way of the surging beast, a nano-second from oblivion.

“Kohlenkommando,” he shuddered. The Carbon Commandos – Wiederkoenig’s2 elite. The toughest brutes in the vehicle emissions standards game. Ex-foreign legion, KGB, SAS, or even … graduates of one of the larger German utilities groups. Then they would serve three more gruelling years of bone-wrecking training at a top secret engine manufacturing plant in the icy wastes of the peninsula. Many don’t even make it through.

Disguised as Polish farm-hands, they perfect the art of engine revving at tractor-pulling competitions on bleak, wind-swept, heathlands of Schleswig-Holstein. Adopting faultless blue collar American accents, they prepare for the rigours of commuter driving at stock-car rallies in . With the pinpoint accuracy of snipers, they learn to handle zebra crossings like zebra hunters. Trained in the art of chicken by top professors of game theory, they overtake with ruthless and breathtaking verve.

These crack troops are the men charged with the ultimate challenge of further boosting emissions from the jewel in the crown of industry.

“Wiederkoenig must have something up his sleeve,” thought Eb. He sensed that the Smog Wars were about to enter a new phase. After the first successful attack on , when Wiederkoenig had been declared president, the conflict had fragmented into urban guerrilla warfare, street skirmishes, and petty firebomb attacks on petrol stations. On the streets of ragged Kommissariat mobs ran night raids on BMW salesrooms, and random tyre slashings were reported on Porsches parked outside the city’s restauarants and night clubs.

It was a matter of weeks before Wiederkoenig did indeed play his next card. One night a dozen of the world’s top automobile journalists were whisked by helicopter to the secret Siberian factory. As loudspeakers blasted out the Ride of the Valkyries, and smoke billowed over the factory floor, a vast, black, growling, throbbing machine – half car, half tank – emblazoned with the notorious Leafless Tree symbol and the fearsome letters “KK”, rolled off the production line, driven by Waldemar Kunt, Wiederkoenig’s right-hand man and notorious head of Kohlenkommando.

“Ladies and gentlemen,” cried Wiederkoenig. “The Porsche Mephisto. A 25 litre monster which can drive any Hummer off the road. A monument to my Genuss, err … my Genius. Neuschwanstein on wheels, a mobile Baroque Basilica to Beelzebub,” he panted. “It is ze most powerful, exquisite, gaß-guzzling, smoke-belching, kakophonically glorious temple to phallic insufficiency that mankind has ever seen! Ha! Those fools at ze European Kommissariat! Vi need more and more emissions, not less and less. I vil SMOTHER ze vorld in a dark, swirling, smouldering fok-“

“Yes fok, you imbecile,” thundered Wiederkoenig as two leather-jacketed Kohlenkommandos wrestled the hapless journalist to the ground and kicked him to a pulp. 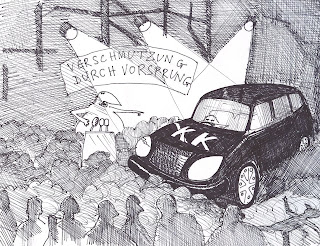 “I vill create a kabbage-souper fok of carbon dioxide and noxious fumes, so thick and dark, zat as my Porsche Mephisto emerges from these black Wagnerian clouds, like a great gothic stallion of triumph emerging from the night and the fok, it vill strike terror into the feeble hearts of the Kommissariat Nomenklatura.” Wiederkoenig paused as the enormity of his messianic vision sank in. A stunned silence fell over the assembled reporters at the press conference. The odd whimper could be heard.

Panic in . No calls were returned. The Smog Wars would continue.

1. For Part I see “The dangers of emissions standards” on www.thebustard.blogspot.com, January 2007

2. Wiederkoenig, the Supreme Ueberkommandant of the Allied European Forces of Freedom to Pollute.

Print Friendly
This entry was posted in The Chronicles of Nat Eb. Bookmark the permalink.