Although calcium is recommended by doctors, the taste of cement and plaster, which are rich in calcium, is not pleasant. Yet, during a construction project you get a lot of calcium in your mouth. Consider, then, two creatures which are obliged, not having hands or machinery, to use their mouths for construction work.

On an early morning trip to Platform Construction Store in Budaörs to buy cement and bricks, I noticed that under the awnings of this building suppliers, house martins have built nests. The nests were placed directly above lights, and, happily, the good people of Platform had constructed wooden boarding around the light shades to collect poo from the nests. This stops the poo landing on employees, customers and goods.

It was good to see that Platform had taken care to solve a problem without simply wiping out the birds nests. This is rather rare example of courtesy to animals; perhaps a show of respect, by builders, of the skills that the house martins show in mud construction. 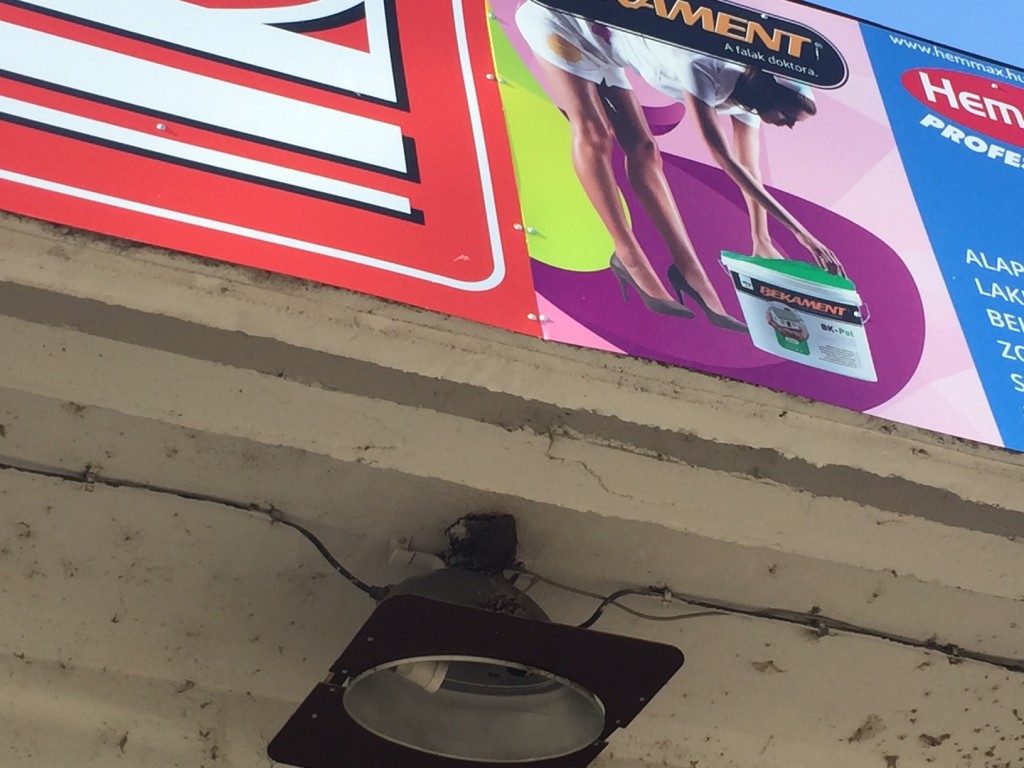 Let’s hope that the enormous amount of construction work around Budaörs does not remove the last sources of open water which the martins need to make their mix.

Back at the building site, I noticed a faint, repeated scratching sound coming from behind black foil taped on to a wooden ceiling beam to protect it from the plasterer. I climbed a ladder to inspect behind the foil, and saw this: 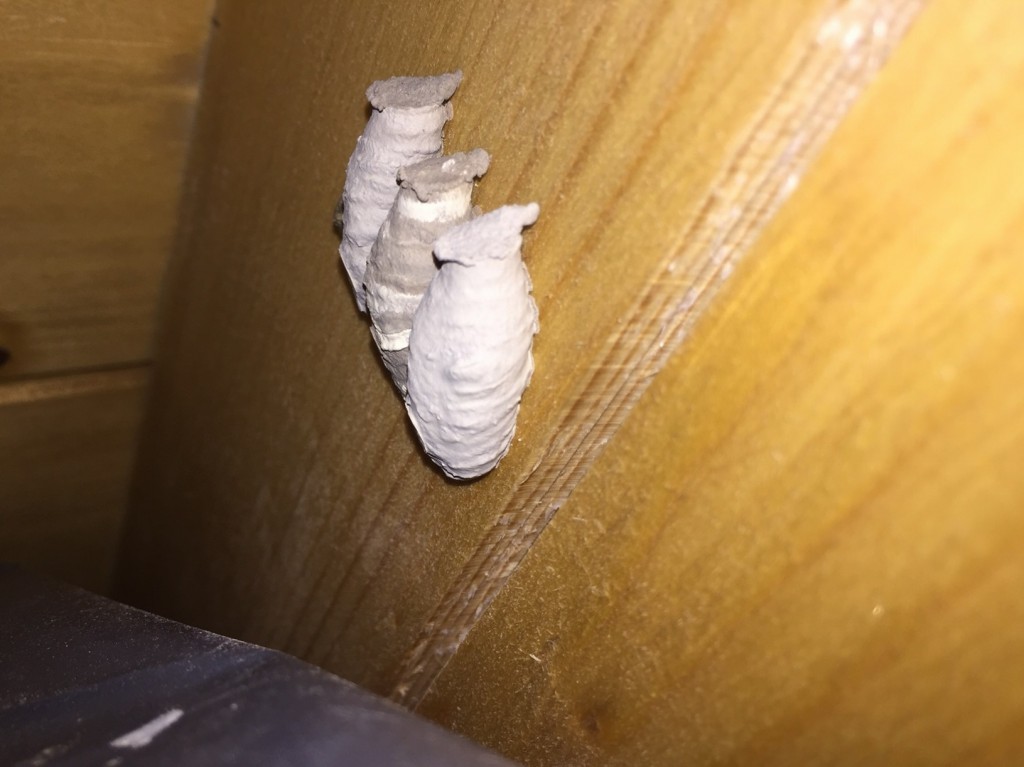 It is the work of the mud dauber wasp, who I had seen earlier collecting mud from wet ground around the house. In each chamber, I read, one larva is put, together with several small spiders as food – a bedroom with larder annex. The amphora-like chamber is then sealed, and the larva, in spring, by which time it has turned into a young wasp, will eat up the flies and then break out of the chamber.

Unfortunately, I disturbed the foil and stuck it back slightly differently. When the wasp appeared, it seemed not to be able to find the nest it was making.

Luckily, the next day I saw that the wasp had found its way back to the nest and continued its delicate construction work.

I am worried that if the nest stays in the house, then the larvae will not know what season it is, and mistime their growth and emerging from the nest. I am thinking it might be wise very carefully to remove the nest from the wooden beam and put it somewhere safe in the garden, where it will experience the proper temperature cycle of autumn, winter and spring. Consultation with an expert is needed.

Death gardening, the style of gardening practised by town councils worldwide, the nouveau riche and other social groupings, seems to have its origins in the upper class. This is consistent with a view that the upper class start things off and then everyone copies them.

Look at the gardens of Schönbrunn Palace in Vienna, Versailles near Paris or Frederiksborg in Copenhagen.  You see straight lines, geometrical patterns, order, monotonous green or simple primary colours and much gravel; a statement of complete control over nature. These are the gardens of kings and emperors. Their realms thrive when they are ruthlessly controlled from the centre, when power is absolute, with no exception and no complaining. Naturally, the aesthetic tastes of such a ruler will reflect his curious psychology, hence a style of gardening which prefers death to life. 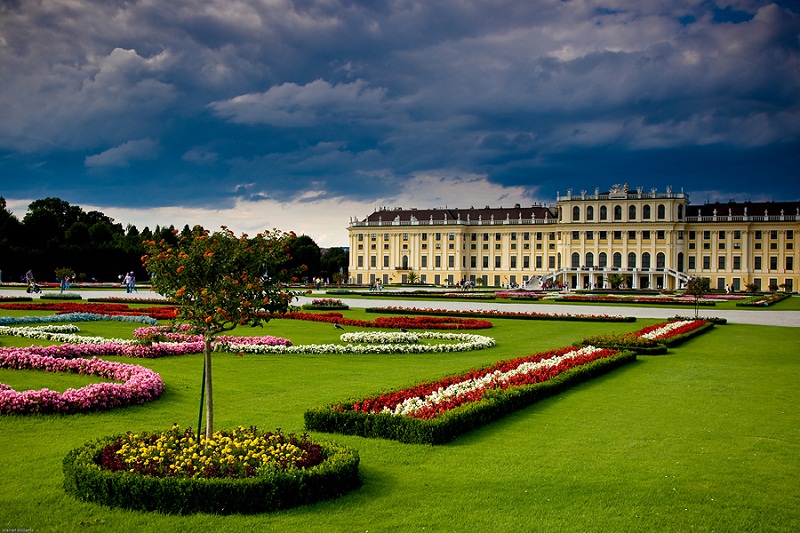 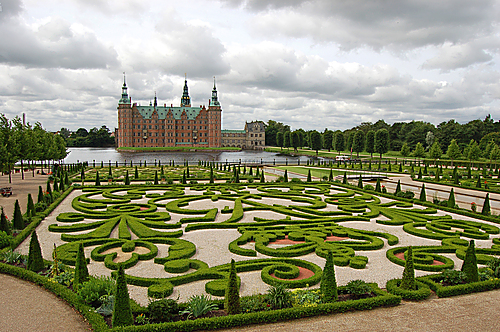 Even where non-straight shapes are allowed, they are formalised and just have one species of plant in.

A few hundred years later, the common man still considers this style of gardening desirable, such is the lure and comforting effect of absolute, centralised power.

First and foremost, a death gardener sees his job as to kill. This is the instruction he receives from his boss. And, armed with strimmer and motorised sprayer, to kill as loudly as possible. At the weekend I visited a source of the killing machine: OBI in Siofok. In the gardening section the first thing I saw were diverse chemicals and equipment aimed at killing or scaring: rats, mice, moles, pigeons, slugs, snails, aphids, mosquitos, other forms of flies and insects and even helpful arachnids … and moss (!!!). Moss??? What the fuck. Beautiful, soft, gentle, comforting, dewy, emerald moss. Yes, to garden is to kill.

In a country were intolerance is encouraged politically, it is not surprising to see such dramatic intolerance of other species. But so ruthlessly, on such an industrial scale, in the back garden?

Outside our building project, the grass banks of the 59 tram were, until Tuesday, awash with blues, whites, purples and yellows of wild flowers. Then came a municipal death gardener and he not only exterminated the wild flowers, but also hacked to pieces two elderberry bushes which were making great progress and had enriched the street with its flowers and fruit, both suitable for making delicious and refreshing drinks.

I came across our neighbour’s gardener out in the street in front of our house, about to attack a frond of wild clematis with its exquisite dried flower preparing to give seed. He told me he had to remove it because it will be ugly. I told him it was from my garden and he should leave it alone. I also said that you shouldn’t cut stuff back until they have finished their growing in later September or October. I am not sure whether this is true or not, but it makes sense that a plant should be able to make as much use as possible of its nutrients. So why were these death gardeners hacking back the neighbours garden in the middle of August?

Outside the office a still flowering hedge was getting the chainsaw treatment. Bright pink flowers being brutally decapitated. Why plant flowers if you destroy them before the flowering is done?

I am not sure how death gardening will be eliminated. It will need a huge sprawling, unkempt movement with many unruly branches and tendrils: to make champions of brilliant wildlife gardeners; to replace IT lessons with wildlife gardening in schools; night time gorilla / guerrilla campaigns to sow wild flower seeds on pristine lawns and to replace decorative evergreens with indigenous fruit trees; punitive decibel tax on strimmers and leaf blowers; an international convention, hosted in Montreal, to outlaw the manufacture and sale of gardening weapons of mass destruction (GWMDs); electro-therapy for directors of municipal works to instil species tolerance; more conversations about moss and earwigs on Game of Thrones; replace the pointless Nobel Prize for economics with a Nobel Prize for garden permaculture; compulsory fence holes for hedgehogs; free days off work for scything lessons and gathering wildflower seeds; retraining the gardeners at Versailles and Schonbrunn as IT consultants, where their deep need for order will be put to better use.