How many refugees should each country take

How do you work out how many refugees each country should take?

I thought of four main things which are relevant:

–          Ability to afford – the richer a country is, the less pain caused by admitting refugees

–          Population – the larger the population, the less impact an additional refugee has

–          Historical responsibility – the more a country interfered in a relevant country, the more refugees it should take from that country

–          Cultural proximity – the close a country is culturally, the easier it is to accept refugees from another culture

I wanted to model this. I considered that ability to afford is represented by GDP per person.  Population and GDP per person give us GDP.  So the first two are covered by GDP

Historical responsibility is quite well linked to how much you took part in arming, bombing or fighting in that country.  Even if a country only had “diplomatic” responsibility for the refugee crisis, the likelihood is that in the background they are supplying arms to one or both sides and that probably means they spend a lot on arms themselves.  I think a reasonable proxy for this is how much money did a country spend on arms since 1990.

Now, given that basically the richer a country and the more populous it is, the more it can afford to spend on weapons, I decided that the arms spending variable doubles up for GDP.  So now I can reduce the first three factors to total spend on arms since 1990.

I am tempted to adjust this for distance, because (with the exception of global policeman USA) the further a country away is from trouble, the less you it is to interfere with it.

Distance is also useful for cultural proximity.  The inverse of distance from the country in question as a simple proxy.  Culture disperses over geographical space because it is about people moving, trading and communicating.  Until very recently the closer you were physically to a country, the more contact you would have, and therefore the more cultural proximity.  This perhaps does not work in the case of colonialism, but let’s see.

As distance is an indicator of cultural proximity – but not a very strong one – and as I do need distance for adjusting my military spending as well, it can serve usefully in my formula.

The number of refugees country X should adopt from country Y = total military spending of country X since 1990 / distance between country X and country Y.

I guess this should be adjusted for the number of refugees already taken, but we can adjust for that later.

Let’s take the example of Syria.  I assumed 5 million refugees from Syria.  I got military spending data from the World Bank’s data website (data.worldbank.org) and distances from www.distancefromto.net).  Spend is calculated in 2005 US$s for the sake of argument.  I included the top fifty military spenders only. 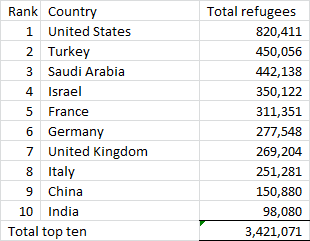 It is good to see muslim powerhouse Saudi Arabia country playing its part.  Also it is good to see China doing its bit despite being a fair distance from things.  I am missing Russia, but it gets away from being in the top ten because it stretches so far east, and the distance measurement takes the midpoint of the country.  If I measure, in Russia’s case, from Moscow, then the top ten is like this: 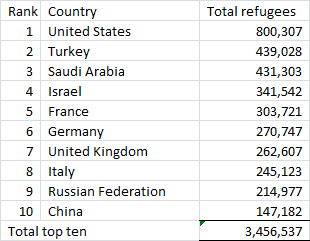 I think this is fairer, both to India and Russia.  So the formula needs to be adapted to reflect not the geographical centre but the economic centre of a country. 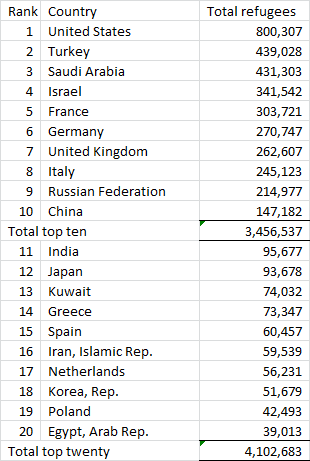 The Southern European countries are also taking refugees from Africa.  This example only assumes Syria, and the exercise has to be repeated for all relevant countries to get the full quota.

I think this system might be a bit unfair to southern European and Mediterranean countries (e.g. Greece, Italy and Spain) whose geographical proximity to the Middle East is greater than their cultural proximity.

I tweaked the numbers by adjusting for the % muslim population in order to strengthen the cultural proximity.  I got a list of % muslim population by country from the Guardian website (http://www.theguardian.com/news/datablog/2011/jan/28/muslim-population-country-projection-2030).  If I simply multiply the military spend / distance by % muslim population, I get very unfair results, because historical responsibility gets too diluted: 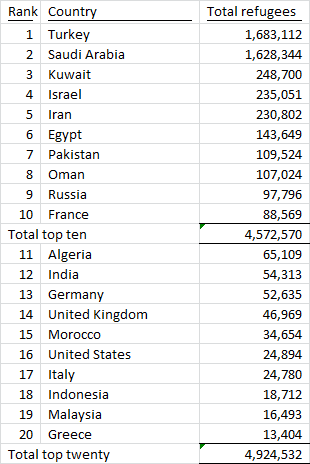 Clearly some big, militarily responsible countries (e.g. the USA and the UK) get away lightly here.

A good compromise (even if we are using formulas, political compromise is needed) is to give a weighting of three to the first formula and a weighting of one to the second.  The result for the top twenty is this: 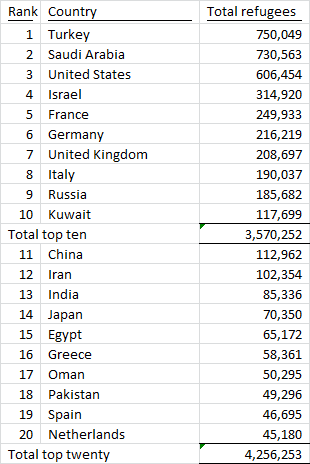 From these figures we will have to deduct those already taken.

Even if the final agreement of the 2015 Telford Protocol on Refugee Adoption brings different results, it is an interesting exercise to think through how different contributing factors influence the outcome.  What I have written above might be too simplistic, but it is a start.  At the moment the whole thing seems very ad hoc and certain governments are spending too much time building walls and fences and not enough time thinking.

1 Response to How many refugees should each country take