A short trip to Oxford prompted some thoughts for the Bustard…

The Bodleian Library is holding a small exhibition about the hunting practices of the Mughals, a medieval Asian people who once ruled across India. The exhibition displayed exquisitely decorated illustrations of hunting birds and Mughal hunters causing misery to all manner of wildlife. 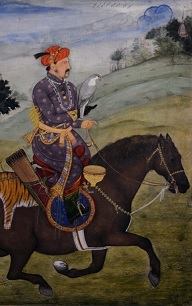 According to the exhibition, “Hunting as a means of demonstrating royal control over birds and beasts was an important source of political legitimation. A true sovereign had to demonstrate his moral and spiritual superiority over wild beasts – a characteristic that if necessary could be transferred to the political field.”

Hunting served many purposes in their society: recreation, confirmation of social status, alternative military exercise, strengthening diplomatic ties, political reward and punishment, and even the prediction of the outcome of campaigns. It was a means of creating myths and claims to legitimacy.

Fast forward four or five hundred years and little has changed in India. An article featured in today’s Quartz shows us how Indians are rapidly, ruthlessly and unthinkingly destroying the nature around them, not least the elite through their techno-optimist steel and concrete urban ideal. http://qz.com/829138/in-its-pursuit-of-smart-cities-india-is-becoming-a-drier-hotter-and-angrier-country/. The political ideal persists that in its path to power and status, man must, and is entitled to, expunge nature.

“Oh,” you might think. “But we are a little more advanced here in Oxford.”

Think again. Consider the multi-million pound homes of North Oxford favoured by its own elite. If you walk the comfortable residential streets off Banbury Road and Woodstock Road you will notice a curious thing: almost all the front gardens are gravelled over or covered with tarmac. Here are some examples. Not very good photos, but just have a wander in that area and you will see dozens and dozens of such gardens. 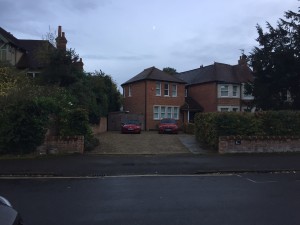 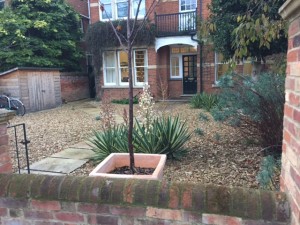 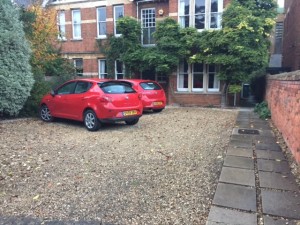 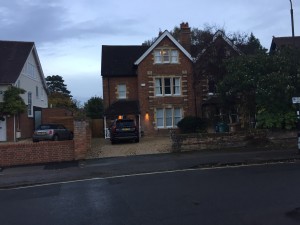 The front gardens of North Oxford are spacious forecourts for the nurture and celebration of one thing: THE AUTOMOBILE. You need a big wide sweep of creamy gravel so your cars have plenty of space to park on and be on display to all passers-by. Luxurious swathes of gravel mean there is no need for carefully tessellated parking here. More gravel, less greenery. Just like Mughal aristocrats, you must eliminate nature around you to flaunt your social status.

Occasionally a scruffy maverick has retained some greenery; there is always a wiser, bolder minority.

If we want to turn back the terrible war waged by mankind on the rest of nature, it is essential for the elite to set a good example. Tragically, the people as a whole usually mimic the values and behaviour of the elite. So if the elite of Oxford promote front gardens of death, the people will follow them.

What’s to be done? I attended a public lecture by the great Buddhist scholar, Richard Gombrich. He talked about a religion or movement in Taiwan called Tzu Chi. This started out 50 years ago when a group of house wives with some spare time began to knit socks to raise money to help the poor receive hospital treatment. Now, 50 years later Tzu Chi is an international religious organisation with a million activists and ten million donors, who support disaster relief, health, education and environmental projects. This is all deeply rooted in Buddhism and centres on the idea of people as private individuals taking action to reduce the suffering of other sentient beings.

It seems that the elite of North Oxford are sentient beings subject to acute suffering: they suffer from a need to have many cars so they can drive everywhere instead of walking, getting on the bike or jumping on one of the many buses which runs nearby, or even calling a cab. They suffer from an irrepressible social urge to conform with their neighbours by applying the pervasive template of a dead front garden. They suffer from the scourge of convenience, where it is easier and preferable to maintain a carpet of gravel rather than nurture beautiful and living and wild things in front of their houses. They might even suffer from an inability to park tightly, thus releasing space for nature. Immense as their brains are, they are weighed down heavily by suffering.

Tzu Chi offers them hope. A local Tzu Chi group could be established by enlightened folk of Oxford. It will visit the many neighbours identified as dead-garden sufferers, bringing spades and garden forks. It will bring saplings of rare varieties of apple; bags of wild flower seed; sacks of wholesome compost. It will bring woodlice and beetles and worms and cocoons of dwindling moths. While the elite are out on their metal steeds, hunting in Waitrose or John Lewis or for country pubs in the Cotswolds, the good people of the Tzu Chi group will weave burgeoning, wild places on the forecourts of North Oxford.

Arriving home to find their villas enveloped in luxuriant wilderness, the burghers of Oxford will be filled with a great awe of nature and thus inspired to adopt new symbols of status: ox-eye daisy, meadowsweet, pepper saxifrage and snakes head fritillary.

This might seem superficial and dreamy. Far from it: at times when the political forces are all weighed against the natural world, one of the best things we can do is to take action as individuals and make space for nature around our own homes.