How laws are made 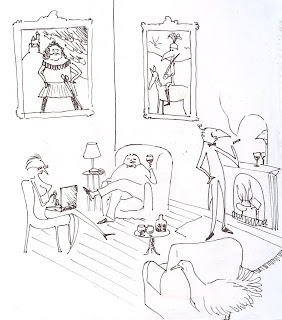 Lawmakers hard at work in Brussels

Employees of the European Commission have recently prepared a working document which explains the Commission’s recently leaked proposal for improving the EU Emission Trading Scheme. It includes a section on using forestry credits in EU ETS. To the extent that this section is representative of the document as a whole and gives an insight into how laws are made by the European Commission, we should all be frightened.

Use of forestry credits is a hugely important topic: the world’s lungs are being destroyed like those of a guy on 60 fags a day, and EU ETS could provide a vital source of funding to do something about it. Yet the Commission’s scribes deploy at least six unorthodox literary artifices, in their efforts to fend off promoting forestry around the world. After all, who would want there to be more trees?

1. Scaremongering about complexity: the Commission places much emphasis on the technical complexity of forestry credits. This does not wash. While emissions trading may veer towards the arcane (viz implementation of N2O monitoring systems according to AM0034), it offers nothing approaching the complexity of tax law or the Hungarian language, two systems used by many millions of people. If thinks that the monitoring of deforestation or the planting of trees is too complex, this may be a reflection of ’ ability to handle complexity rather than anything to do with trees. Many of the technical difficulties surrounding forestry credits have been thoroughly addressed by experts in the field.

2. Flaunting ignorance: The Commission’s people claim that “all options [regarding the inclusion of LULUCF] under consideration pose problems concerning the temporary and reversible nature of LULUCF activities.” Again, real experts know that these problems have been tackled by methodology wonks, and are far less significant than we would think. The risk of loss from a natural event in managed forests is very small, averaging 0.04% of loss per year. That is, while you can list lots of theoretical reasons why forests will fail, in practice they are much more sturdy than … err… the average renewable energy project, of which the Commission is so enamoured. Always eager to pronounce on matters it does not understand, might earn more respect by listening to those that actually know.

3. Use of falsehoods: The document states that “LULUCF projects cannot physically deliver permanent emissions reductions.” This is untrue. There are many forests which are centuries old or more – implying that if well looked after, forests indeed delivery very long-term reductions in emissions. The falsehood is employed to make us think that LULUCF is suspect and very different from other forms of avoiding emissions of greenhouse gasses.

The benefits of avoiding deforestation are as real and permanent as any activities that keep coal safely tucked away under ground. A forest must be carefully protected to avoid deforestation by a later generation. But a wind turbine must be kept oiled, and a hydro-plant will only operate as long as it is regularly maintained, or else it will just get clogged up with weed. And neither actually stop us going back later and digging up a bit more coal. Nothing is permanent. Yet the benefits are here and now and real. And we need every bit of help we can get.

4. Spouting rubbish: “LULUCF in CDM slows down technology transfer and low-carbon technology development, as credits from forestry and land use will be much more competitive on price and hence crowd out other project types.” A first-year consultant in a Big Four firm might just get away with such a claim. That is, if he happened to be writing a report for a bankrupt abattoir in a suburb of . Whose octogenarian general manager speaks no English and was blinded at an early age. But its inclusion, with no further substantiation, in a serious political document of the European Union is crass.

Common sense tells us that with tight limits on greenhouse gas emissions, there should be robust demand for all forms of projects –LULUCF as well as those of a technological nature.

5. Ignoring numbers: The argumentation is all based on theory and pontification, devoid of numbers which could help validate the arguments and give them some context. For example, they argue about the “considerable risks related to the temporary and reversible nature of temporary CERs”. How “considerable” is “considerable”? How big is the problem? Without an estimation of how many temporary CERs would come into the system, we cannot foresee their impact on that system2. Perhaps allowing temporary CERs into EU ETS would bring benefits to the birds and beasts and people of the forests. Perhaps those benefits would outweigh the risks. We shall never know, because of the dismally low intellectual level of the Commission’s political process.

6. Skating on the thin ice of alarmism: They put the final dagger into the back of forestry with a claim which is as absurd as it is portentious. “Development towards a low-carbon economy and positive incentives for relevant innovation efforts would be put at stake [by the recognition of LULUCF]”.

A few more insidious techniques are used, but I think you will get the point.

Commission employees may be over-worked. They may be under-paid. They may even eat unsuitably large amounts of sausage, and be influenced by malign interests. But a higher level of rigour should be applied in the development of policies aimed at saving the planet. It is grossly negligent to give such perfunctory treatment to an issue as grave as the destruction of the world’s forests.

One suspects that has an emotional objection to promoting forestry. Rather than clearly explaining the political arguments behind that objection, they try and bury LULUCF in a pile of misleading, poorly thought-out, and badly written3 paperwork.

Unless it can improve its methods of lawmaking, should be planted over with a thick, bio-diverse cover of forest – financed, of course, by LULUCF.

1. In Kyoto-speak the word for forestry is LULUCF

2. This reminds us of the thousands of man hours wasted by the Commission on the double counting problem from JI, which seriously wounded JI despite being totally immaterial to EU ETS in the scheme of things

3. Use (but not mention) of the word “monitorability” should surely be punishable by something cruel and unusual